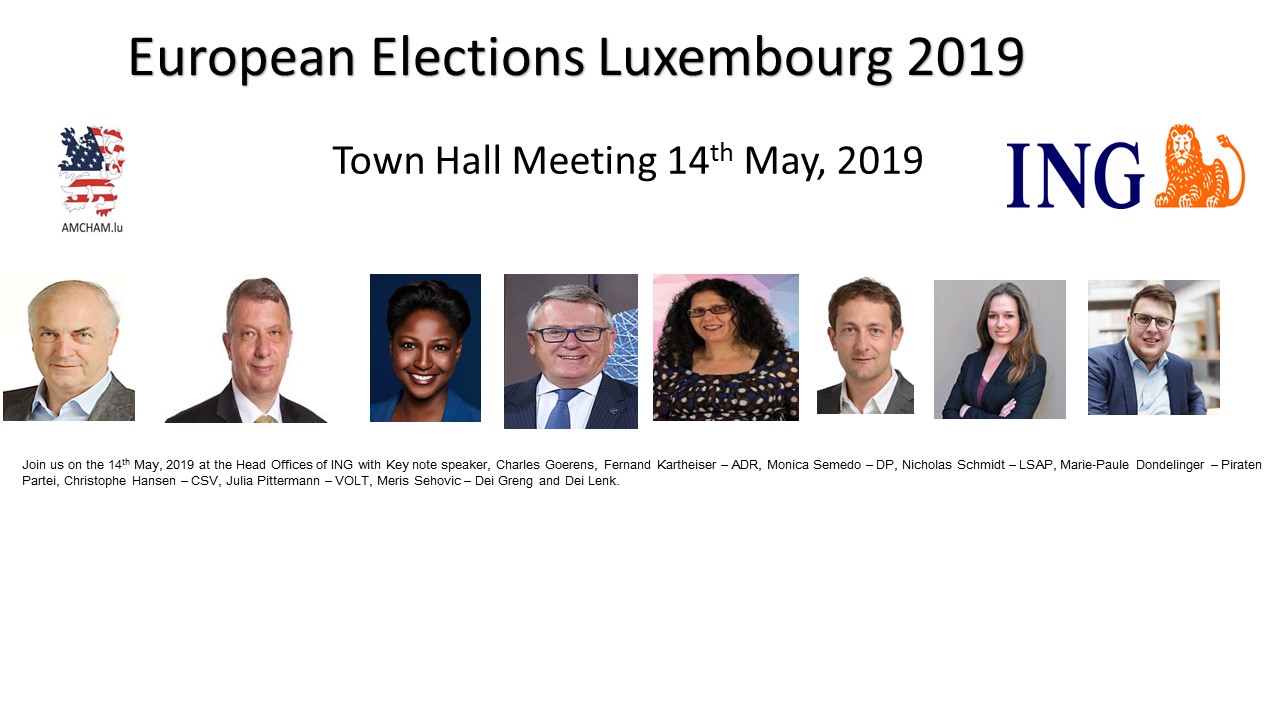 Following the highly successful 2018 Town Hall event, we at AMCHAM continue to work hard to inform and involve the English-speaking foreign residents as voters in the 23.-26. May European elections. To this end, we invited you to participate in a Town Hall Meeting with Nicolas Schmidt (LSAP), Monica Semedo (DP), Meris Sehovic (Déi Gréng), Marie –Paule Dondelinger (PiratePartei), Fernand Kartheiser (ADR) and Christophe Hansen (CSV), Julia Pitterman (VOLT) and Carole Thoma (dei Lenk) as guest speakers. The event is organized by AMCHAM Luxembourg and ING on 14. May 2019.

Every five years and coming in May 2019, the European elections are when we all get to vote. The outcome having a major influence in our day to day lives, for many residents here in Luxembourg it’s their first time.

We are voting to elect six European representatives for the European Parliament. Once elected, their first job will be legislative, discussing, amending and voting on European laws and the budget.

Elections for the European Parliament are made by direct universal suffrage. Voting is compulsory for voters on the electoral registers. This includes nationals of other EU Member States domiciled in Luxembourg, who have the right to vote or stand for election in the European Elections, provided that they have resided there at the time of the application for registration on the electoral roll.

Agenda for the Evening

18:30 Welcome Speech by AMCHAM and ING Bank.
Keynote Speaker Mr Charles Goerens, longest serving Luxembourg MP in the European Parliment
Each candidate has 3 minutes to talk
Questions and Answers from the audience, after Q & A each candidate will be given 1 minute to conclude.
Networking cocktails and food generously offered by ING Luxembourg
The evening finishes around 21:30