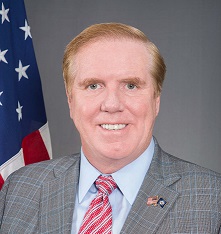 True to the U.S. Embassy in Luxembourg’s motto “Reflecting on the past while looking into the future,” Ambassador Evans will explore how the relationship between Luxembourg and the United States has flourished and the opportunities for further growth in the future.”

Before becoming Ambassador, he served as a distinguished attorney, author and public servant in a variety of roles at the federal, state and local levels of government. He served as outside counsel to Speakers of the 104th-109th Congresses of the United States.

In addition, he served on the State Election Board of Georgia (2001-2011) and as co-chair of Judicial Nominating Commission of Georgia (2010-2018). He also served on the Standing Committee of Government Affairs of the American Bar Association, the Board of Governors of the State Bar of Georgia, the Chair of the Torts and Insurance Section of the Georgia Bar, as well as various committees in a variety of capacities.

Ambassador Evans has co-authored eight books, two syndicated columns, and numerous programs and seminars on topics ranging from professional ethics to climate change. He appeared regularly on national cable news networks on current political events. For his work and service, he has received numerous awards and recognitions across the United States. He received his Bachelor of Arts degree from West Georgia College in 1980 and his Juris Doctor degree from the University of Georgia in 1983.

Ambassador Evans is married to Linda Evans, a retired New York attorney, and has a son who is a practicing attorney in Atlanta, Georgia. He was born in Dublin, Georgia.