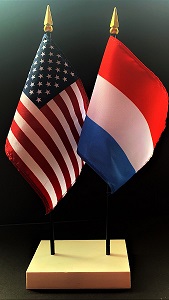 The US and Luxembourg have been friends and allies for quite some time:

* Because of 19th century Immigration, there are now more persons of Luxembourg ancestry living in the United States than currently hold Luxembourg passports living here in Luxembourg

* The 5,073 American soldiers buried with General Patton in the cemetery at Hamm clearly show the sacrifice that Americans have made to ensure Luxembourgers live in freedom

* Post world war II investment by American manufacturers (Goodyear, Dupont and others) have significantly helped Luxembourg recover from the ravages of the war, and remain still active today.

* The successes of the Financial sector, the IT sector and the nascent Space sector have all brought great prosperity to Luxembourg and owe much to US support

* Luxembourg have been key and much appreciated allies and partners in NATO, within the context of the EU and within the worlds of global political and economic affairs!

Like all relationships, the US-Luxembourg relationship has evolved over the decades. But, all would agree that its depth and scope has accelerated in recent years. So, will that change with a new Administration? And, if so, how?

To discuss possibilities, opportunities, and hopes, AMCHAM is very pleased to partner with the Luxembourg American Chamber of Commerce in New York (LACCNY) and Delano Magazine for a ZOOM discussion between US Ambassador J Randolph Evans and former Vice President of the European Commission, Viviane Reding, moderated by AMCHAM Chairman Paul Schonenberg.

Where and when: Join us for this ZOOM discussion at 18:00 (Luxembourg time) on Tuesday, 15 December, the day after the United States Electoral College votes to confirm Joe Biden will become the next President of the United States. This is a public service event offered to Members & non-members

Registration Below. Zoom codes will be provided shortly before the event.