SOLVIT (named after the English term “solve it”) aims to deliver fast, effective and informal solutions to problems encountered by individuals and businesses when their EU rights are being denied by public authorities.

SOLVIT is a free of charge service provided by the national administration in each of the 27 EU countries[1]. In Luxembourg, the national SOLVIT Centre is based at the Ministry of Economy (see contact details below).

The SOLVIT network deals with cross-border problems caused by a potential breach of Union law by a public authority, where and to the extent such problems are not subject to legal proceedings at either national or Union level.

The areas of intervention of the SOLVIT network are very diverse. Complaints submitted by citizens and businesses are mainly in the following key areas regarding the EU Single Market:

[1] as well as in Iceland, Liechtenstein and Norway.

The SOLVIT network was set up by the European Commission in 2002 and is celebrating its 20th anniversary this year. 85% of 28.600 cases were solved during the 20 years of SOLVIT’s existence. It also received an additional 30.397 complaints that fell outside SOLVIT’s remit. 1 as well as in Iceland, Liechtenstein and Norway. SOLVIT’s caseload has increased exponentially over time. In 2021, SOLVIT received 5.231 complaints, of which 2.455 were accepted. This compares with 155 cases received in the first full year of SOLVIT’s operation. Even taking into account the expansion of the network, this means that SOLVIT’s overall caseload has increased by more than 1 550% in 20 years. 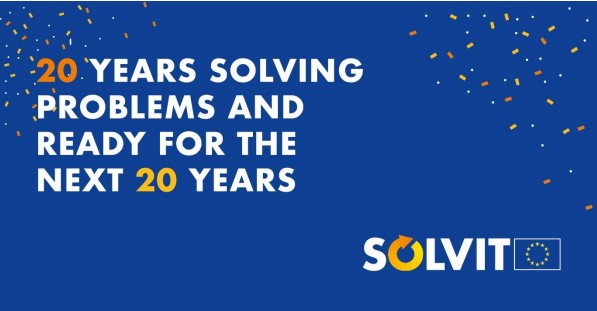 SOLVIT complaints are submitted by a citizen or a company via an online form available on the website www.solvit.eu. It is also possible to contact directly the SOLVIT centre in the country of residence or establishment. The 27 national SOLVIT centres are committed to trying to find an amicable solution to problems within 10 weeks. The fact that the SOLVIT centres are a part of the national administration provides privileged leverage to challenge and persuade the public entities concerned to comply with EU law. In practice, all cases are handled by two SOLVIT Centres: the Home Centre, which is the SOLVIT Centre of the country with respect to which the applicant has the closest links (nationality, place of residence, establishment), and the Lead Centre, i.e. the SOLVIT Centre of the EU country where the problem occurred and where the administration concerned is located. This cooperation is organised under the supervision of the European Commission.

Concretely, what are the issues solved by SOLVIT? In which cases can US citizens and companies get help from SOLVIT?

SOLVIT can only help if EU law has been misapplied by a public authority. Thus, SOLVIT’s services may concern US companies established in the EU that encounter administrative problems when doing business across borders within the EU, as well as US citizens who are employed by businesses established in the EU.

A Bulgarian transport company submitted several applications for VAT refunds in Romania. One year later they still had not received any payment or reaction from the Romanian Tax Office. EU law provides for a 4-month period to proceed to the refund or to issue a refusal decision. As this period had elapsed some time previously, the company turned to SOLVIT. Thanks to SOLVIT’s intervention, the company received the VAT reimbursement.

For private individuals, SOLVIT handles many complaints about family members of EU nationals exercising their right to free movement within the EU.

A French national living in the Netherlands with his Chilean partner decided to move back to France. When the Chilean partner applied for a residence card, the French authorities considered her application under French rules on family reunification and closed the application without action. However, as the French national had lived in another EU country before, the application had to be considered under EU rules which are more favorable. Upon advice from Your Europe Advice2 , the complaint was transferred to SOLVIT.

Through the intervention of SOLVIT, the French authority agreed to reconsider the application for residence as a family member of an EU citizen and granted the residence card.

In 2019, a special SOLVIT procedure was set up by the Regulation (EU) 2019/515 of the European Parliament and of the Council of 19 March 2019 on the mutual recognition of goods lawfully marketed in another Member State.

If an authority refuses market access to goods lawfully placed on the market in another EU country, the economic operator can submit the case to SOLVIT.

This procedure also obliges the European Commission to provide an opinion within 45 days if the SOLVIT centres cannot agree on a solution.

A Belgian company applied for the approval by the Danish authorities of the addition of nutrients to a chocolate protein bar sold in more than 20 EU countries. The responsible Danish authority approved the majority of added nutrients but banned the addition of 433 μg vitamin A, 11 mg iron, and 6,2 mg zinc per 100 gram to bars because they considered that the total daily intake of nutrients when the fortified bar is included in the diet could pose a risk to 4 to 6 year-old children.

SOLVIT intervened to explain to the authority that the objective to protect children’s health could be reached by other means, for example by inserting a warning on the label ‘not suitable for children’. Further to the information in the initial application, the company provided the new information that they would be marketing the product only to adult consumers and that the label would include a warning to prevent consumption by children.

Based on this additional information and exchanges, the Danish authorities agreed to repeal the initial ban and issued a new decision. The decision specifies that the condition for marketing does not require specific labelling of the product, but merely that the marketing of the product is targeted to the age group above 18 years.

The complaint was solved within 10 weeks.