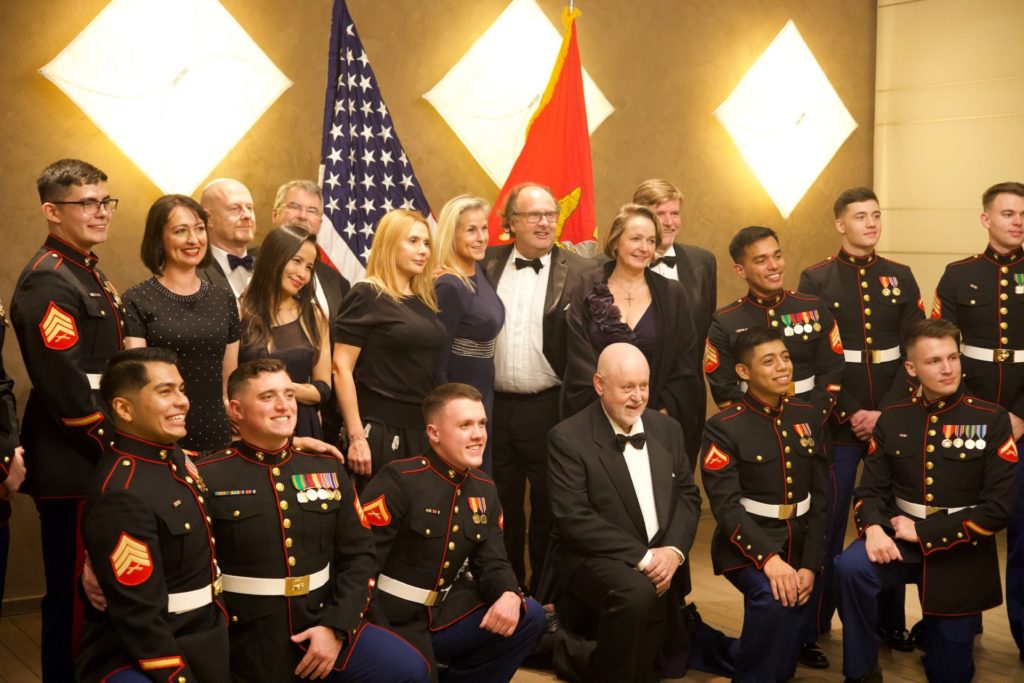 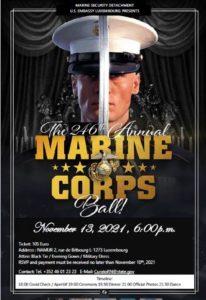 The Marine Corps Ball is a unique event that allows Marines, young and old and their guests to come together and celebrate the founding of the Marine Corps 246 years ago in 1775.

The Corps goes to great lengths each year to celebrate our birthday and honor our traditions. Tonight, I am going to try to put into words what all Marines feel in their hearts, to help our guests understand what it means to be a Marine.

Our motto is “Semper Fidelis” which means “Always

Faithful” Simply put, the Marine Corps is a family to which we are faithful. Everyone who has earned the right to claim the title “Marine” is a member of this family for life.

We adhere to the phrase “Once a Marine, always a Marine”.

We describe this concept of family in the phrase “Esprit de Corps”, which implies that there is a spirit in our Corps that sets us apart.” There is, and it does”. Sometimes we describe it in other ways meant only for the ears of other Marines but I will not bore you with those expressions here tonight

This lifelong feeling of family is based on trust in your fellow Marines. We take care of each other in combat and in times of peace. We will give up our very lives for our fellow Marines. The greatest comfort we can experience in combat is the feeling that the man on our left and the man on our right will do everything possible not to let you down.

Unlike the U.S. Army, Navy and Air Force, the Marine Corps is a small unit It is this small size that has enabled us to bond together as what is often referred to as a Band of Brothers.

The Corps recruit’s people specifically to fight, all Marines are trained as Riflemen and go thru basic combat training. It is during this initial training where they begin to acquire this special concept of trust and family. It is on the battlefield where we need and use this bond.

Marines are usually the first to enter onto the battlefield and are almost always outnumbered and out gunned. Therefore, we only have ourselves to trust in when things get hot.

“Trust in your fellow marines” is the key principle drilled into each of us from the beginning in Boot camp and stays with each of us throughout Her or His life.

Unique to Marine Corps training, unlike the other armed services is the emphasis placed on our History, Customs and Traditions. We are proud of our history and feel a responsibility to Honor the deeds of Marines who have gone before us. We adhere to our Customs and Traditions, which include our careful attention to the wearing of our uniforms. Every seam must be in place, shoes shined, belt buckles polished, hair cut, and I do mean cut. Even after leaving active duty 45 years ago, I cannot get away from the habit of keeping my hair short as you can easily see.

Marines are recruited to go into combat. In our most basic training, we experience as many aspects of combat as possible for example:

Chemical warfare training, “where we learn to put on a gas mask after being exposed to tear gas“. this is not a pretty sight.

Swimming classes, where we learn to stay afloat for at least an hour in combat uniform with boots on.

Hand to Hand combat, where big Marines get to beat up on little Marines.

Close order drill, which looks like a lot of marching around, but is an effective way to teach discipline and remove the last vestiges of civilian life.

just to name a few.

It is this training in warfare and our history that cement our Bond of Family and Trust.

The Marine Corps has been involved in our countries battles since the Revolutionary War. When our country has called, we have answered. We have fought around the world in all kinds of terrain and climates.

The Corps legacy was built on the battlefields of Tripoli, Chapultepec, Okinawa, Guadacanal, Iwo Jima, the Chosin Reservoir and in Ke Sahn, Hue City, Afghanistan and Iraq. Every Marine here tonight knows the history of these battles.

Before you can wear the Emblem and claim the title, you must know of those who made that emblem and title meaningful. Each of those who has gone before, lives in the hearts of those of us who have earned the title today.

The sense of belonging to something that will outlive us,

will be carried with every one of us the rest of our lives.

The Marine Corps Ball, which is held every year at all posts around the world, allows us to remember together the Traditions and History that makes us proud to be Marines. We celebrate our birthday wherever we are, here at a formal ball in Luxembourg, or even in a fighting hole in any place where we may be engaged in combat.

In closing, I would like to share a quote from a unlikely source, from someone who seems to have known and appreciated our family of Marines more than most. She is none other than Eleanor Roosevelt. In 1945, Mrs. Roosevelt said “The Marines I have seen around the world have the cleanest bodies, the filthiest minds, the highest morale and the lowest morals of any group of animals I have ever seen. Thank God for the United States Marine Corps”

Thank you, my fellow Marines here in Luxembourg, who live up to the title of “Marine” and thanks to all of you who support our family. Semper Fi