The Statue of Liberty was almost placed in Egypt. The designer, Frédéric Auguste Bartholdi, proposed building a giant statue there for the inauguration of the Suez Canal called “Egypt Carrying the Light to Asia,” but this never came to be. Bartholdi redesigned the plan into the Statue of Liberty.

The official name of the statue is “Liberty Enlightening the World.” Over time, this lengthy title was shortened in common parlance.

The statue was almost lost at sea while being transported to America. It was on board the French ship Isere and it encountered stormy weather near Portugal, sending it off course.

Women were barred from the original dedication ceremony. Upset suffragists held their own ceremony in a nearby harbor, lamenting that a giant female figure stood in the harbor representing liberty while American women were still being denied the right to vote.

In the 1980s, restorers discovered the statue had turned into a giant battery. This was due to galvanic corrosion, in which dissimilar metals are brought into electrical contact under water. In the statue’s case, moisture was trapped between the copper skin and the iron frameworks.

The statue’s head is misaligned by two feet. The issue was discovered during the restoration of the statue before its 100th anniversary in 1986.

Gustave Eiffel, the man responsible for designing the Eiffel Tower, helped design the Statue of Liberty. Eiffel worked on the internal structural elements of the statue, with Bartholdi serving as the main designer.

Despite the statue’s immense size, its copper skin is barely 1/16 of an inch thick.

Both Boston and Philadelphia wanted the statue to be built in their cities. New York was having trouble raising the money for it and both cities offered to pay full price. In the end, New York was able to raise the funds, and Lady Liberty has called the Big Apple home ever since.

The 7 points of her crown symbolize the 7 seas and the 7 continents — as well as the rays of the sun.

The statue actually has broken chains at its feet, and its right foot is raised to symbolize moving away from oppression. The U.S. abolished slavery, which inspired Bartholdi in the first place, just 21 years before the statue’s dedication.

The statue was damaged by German saboteurs during World War I. Michael Kristoff, along with two other German spies, are believed to have blown up a munitions stash in 1916 on nearby Black Tom Island. Shrapnel pierced the statue, causing about $100,000 worth of damage.

300 types of hammers were used to shape the copper for the statue.

The statue was originally meant to be taller. The pedestal was first designed to be 114 feet tall. This measurement was scaled back to 89 feet to cut construction costs.

The Statue of Liberty used to be reddish-brown. The copper statue turned green from oxidation, a process that gives copper a green patina over time. 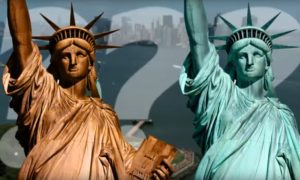