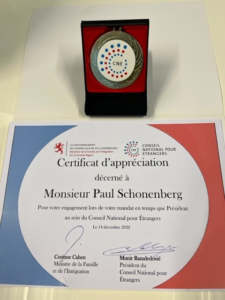 During the Extraordinary Plenary Session of the National Council for Foreigners held last  December, a Medal of distinction for his services as President of the Luxembourg National Council of Foreigners (CNE) from 2012-2017 was awarded to AmCham CEO Paul Schonenberg.

In addition to the medal of distinction, Schonenberg was also presented with a Certificate of Appreciation for his commitment during his mandate as President of the National Council for Foreigners, awarded by the Minister for the Family: Mrs. Corinne Cahen and The President of the CNE, Mr. Munir Ramdedovic.

The CNE was set up as a consultation body composed of representatives of Luxembourg international community, which in 2016 represented 46 percent of the country’s population.

According to the law of 16 December 2008, the National Council for Foreigners is responsible for ‘studying, either on its own initiative or at the request of the Government, problems concerning foreigners and their integration’.