The positive impact of the Flat Tax on the Bulgarian economy

In the past 25 years, Bulgaria has undergone major economic changes worth analysing. The country revived all its major business sectors and improved on all economic indicators, thus raising the quality of life of its population. Numerous internal and external factors influenced this business renaissance, however, a factor with a significant impact is the country’s radical tax reform. Between 2007 and 2008 Bulgaria introduced a flat corporate and personal income tax of 10% which has proven to be truly transformative.

In the early 90s, Bulgaria transitioned from a closed socialist economy to democracy and most importantly – to an open market economy. The change was accompanied by a process of privatization of the state-owned companies – reaching a share of 90% before the transition. The state decided to accept a policy of high direct taxes, including a strongly progressive income tax. In 1993 income tax followed a scale with nine different rates – between 20 and 52% (accompanied by high social security tax). Companies were taxed at almost 40%, plus additional municipal taxes which reached 10%.

It was precisely during this period of high and progressive taxes that the economy fell into a crisis and tax evasion turned into a widespread practice. It was extremely difficult for companies to manage their accounting, with even micro businesses often needing multiple accountants working to manage the labyrinth of the taxation system. The “grey” economy in the 90s increased dramatically to reach around 35%, mostly due to the failure in personal and corporate tax payments. The crisis and the series of unsuccessful policies in the first transition years caused the system to be reconsidered.

Increased tax collection could not be achieved without lowering the rates and simplifying the system, including limiting the “loopholes” in the laws. What is more, encouraging the private sector and attracting investments also required reforms and lowering the rates for direct taxes as many other countries offered much better conditions.

In 1994 VAT was introduced and the maximum rate for income tax was lowered from 52 to 50% – a symbolic first step of the tax reform. 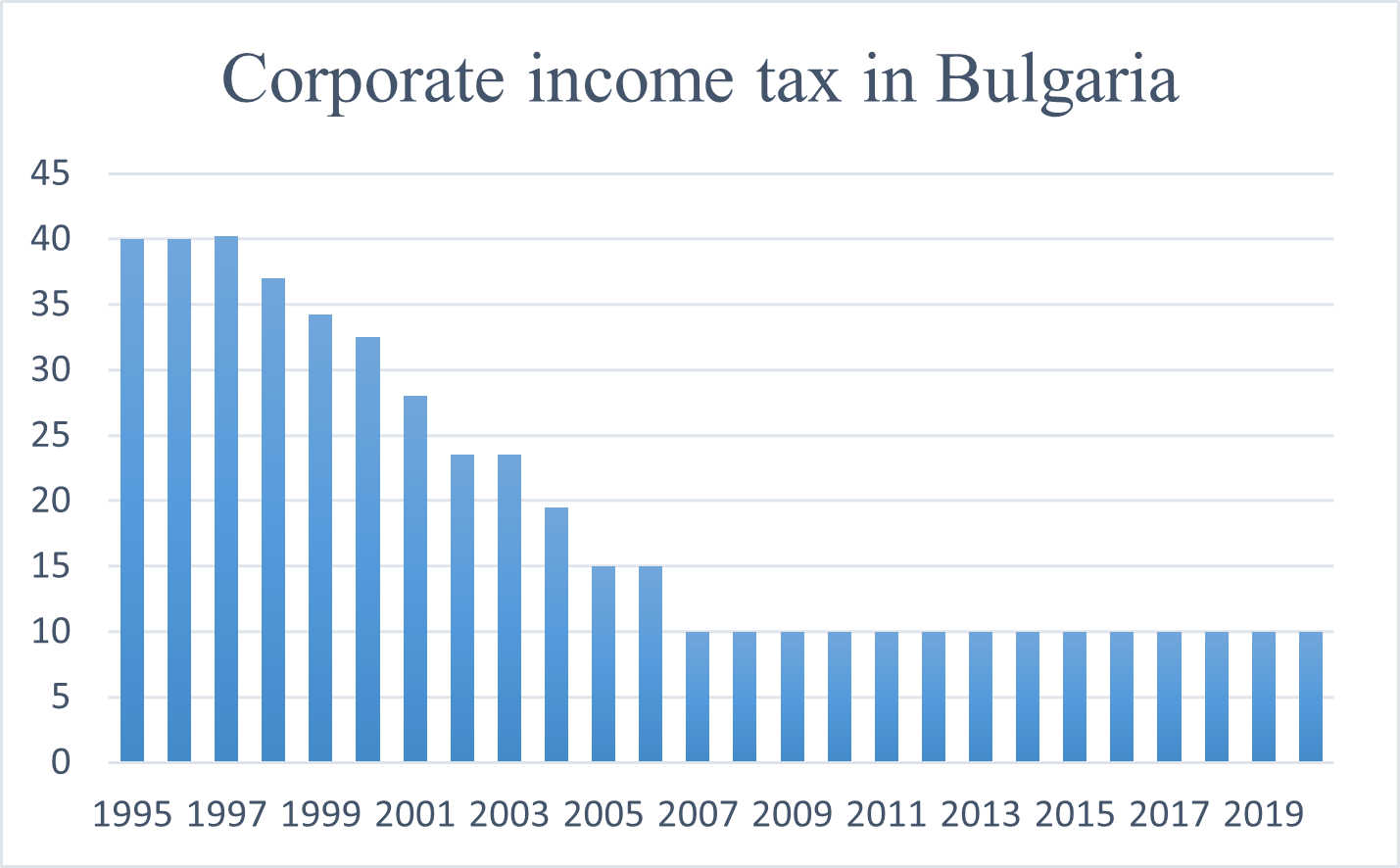 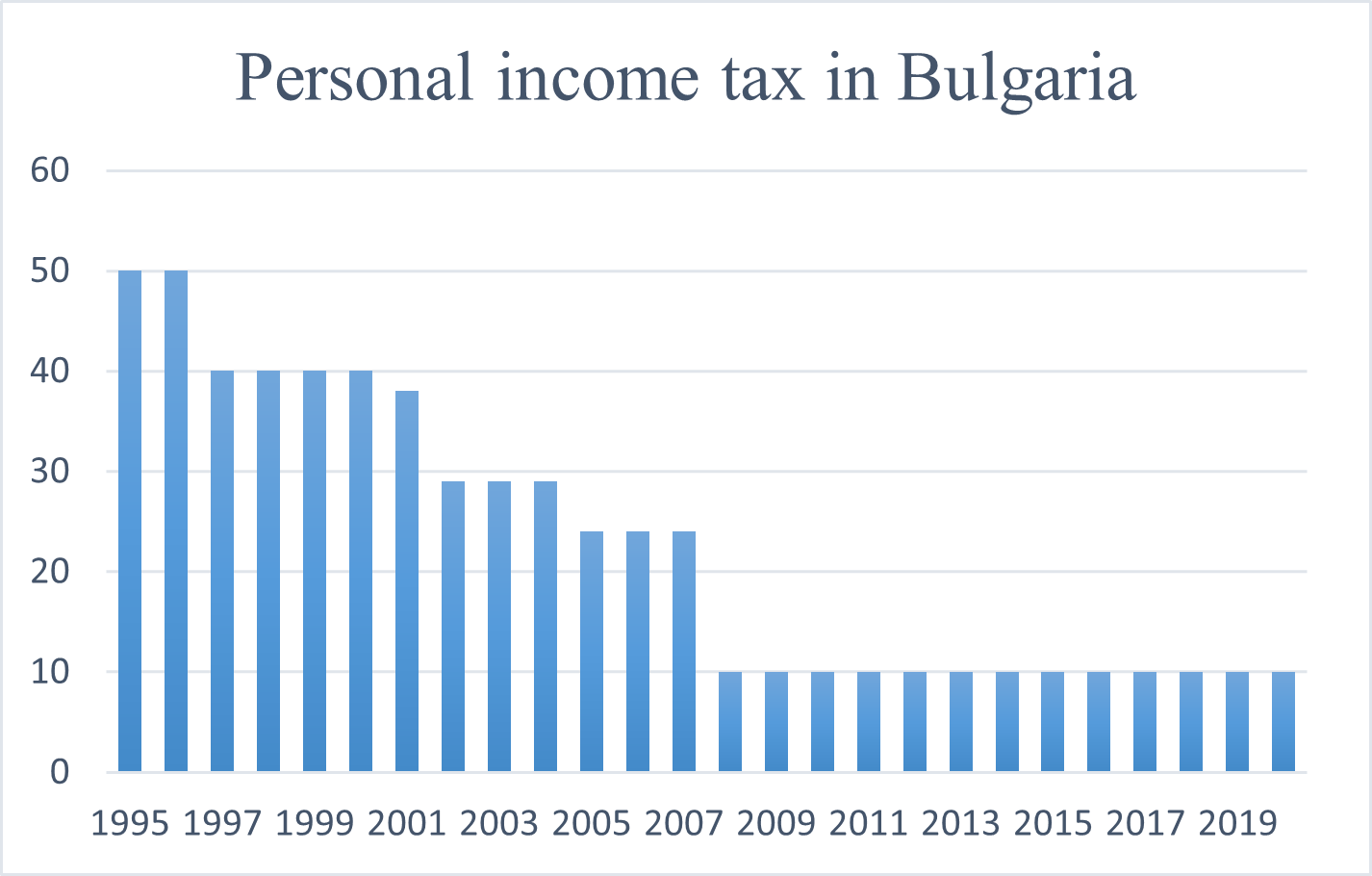 A chain of extremely important events followed. In 1995 Bulgaria started the application process to become an EU member and began changing into a true European democratic country. On July 1, 1997 a currency board was introduced to stop the instability of inflation, the official exchange rate of the Bulgarian currency was fixed to the German Mark and on January 1, 1999, after Germany adopted the Euro, the exchange rate automatically changed to BGN 1,955.83 for 1 Euro – it has remained the same to this day. The currency board was successful in stopping the inflation, what’s more – it led the country to a more conservative fiscal policy. These decisions aided Bulgaria in its path to EU accession the next step towards which was joining NATO in 2004.

By 2005, as a result of the economic and tax reform, Bulgaria was gradually recovering from the economic plunge of the first transition decade. Moreover, despite the systematically lowered direct taxes (or maybe precisely because of that) contributions to the state budget consistently rose faster than predicted and after 2002 a growing budget surplus kept being reported. The positive budget balance (2-3% budget surplus for 2004, 2005 and 2006) created a buffer, an opportunity to speed up the tax reform without risking a budget deficit.

The gradual drop in tax rates on profit in the period after 1997 led to the interesting observation that lower rates did not cause a proportional drop in revenue. In fact, in some years an increase of tax revenue was reported despite the lowered tax rate (for example 2001 which marked a 29,49% increase in revenues from corporate tax compared to the previous year after lowering the rates).

At the very beginning, when the idea of a 10% flat tax was formulated, the concept was that the tax had to be low enough to minimize the burden on taxpayers and stimulate payment while providing sufficient resources for the state budget. Research by economists indicated that a 10% rate would get rid of the incentives for that tax avoidance and would increase the tax base considerably. In this way, with a low rate, the state could get the same – or higher – revenue, simultaneously encouraging investment and development.

Several positive effects of the tax reform can be highlighted:

It is important to note that, even though the Social security rate (which was at its highest in 2008 – 43.6%) was also lowered to 29.9% in 2011, it has been slowly rising since that point. As of 2020 it stands at 33.4% which is a little higher than the European average – 31,96%. This also balances the state earnings in a way that helps improve healthcare and keep the pension funds stable. 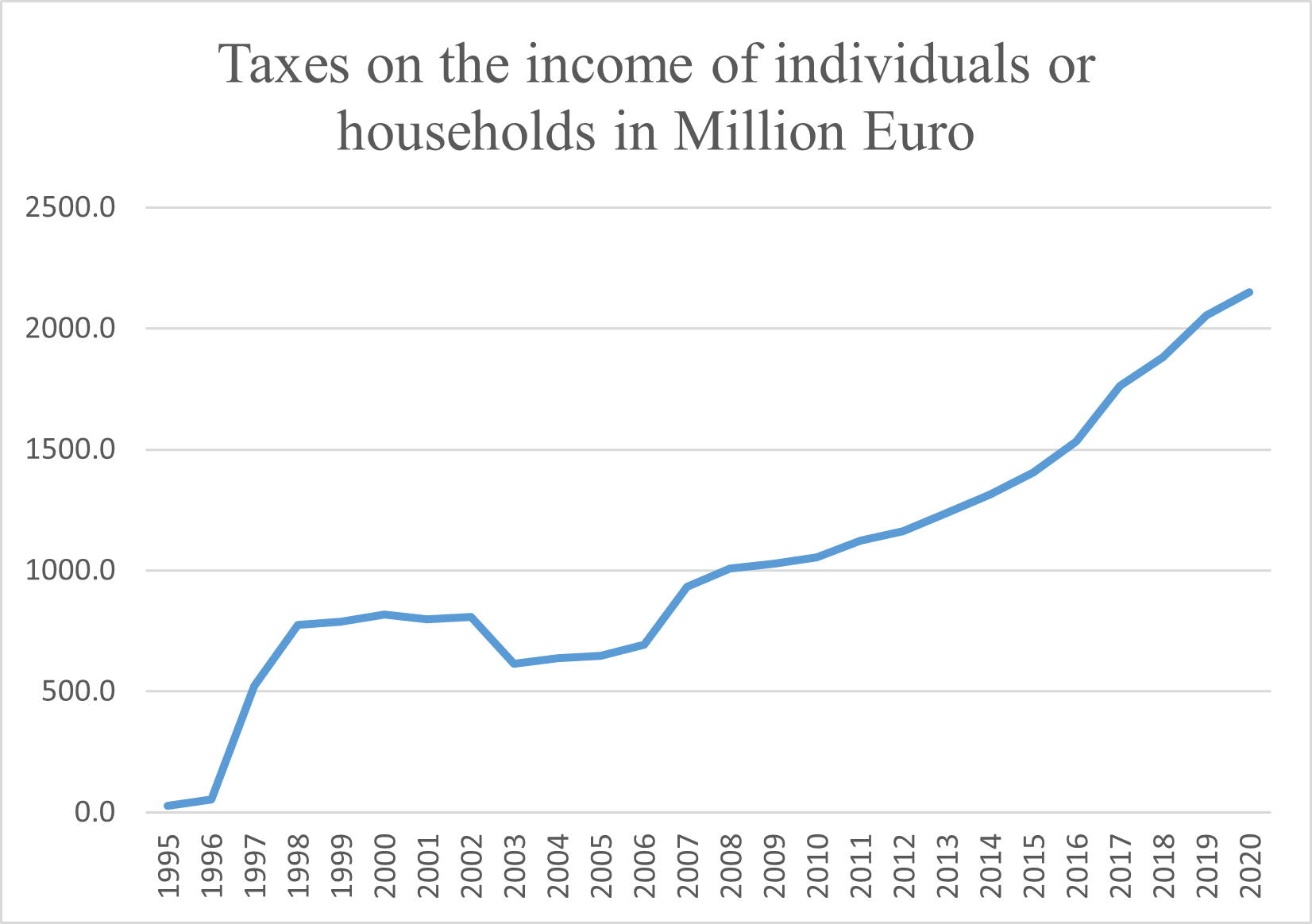 (Data by NSI – the National statistical institute on Bulgaria)

The flat tax made it easy and simple for companies to do their accounting. What’s more – the lower taxes opened up resources businesses could invest in improving their operations, expanding and raising salaries, despite the 2008 crisis. 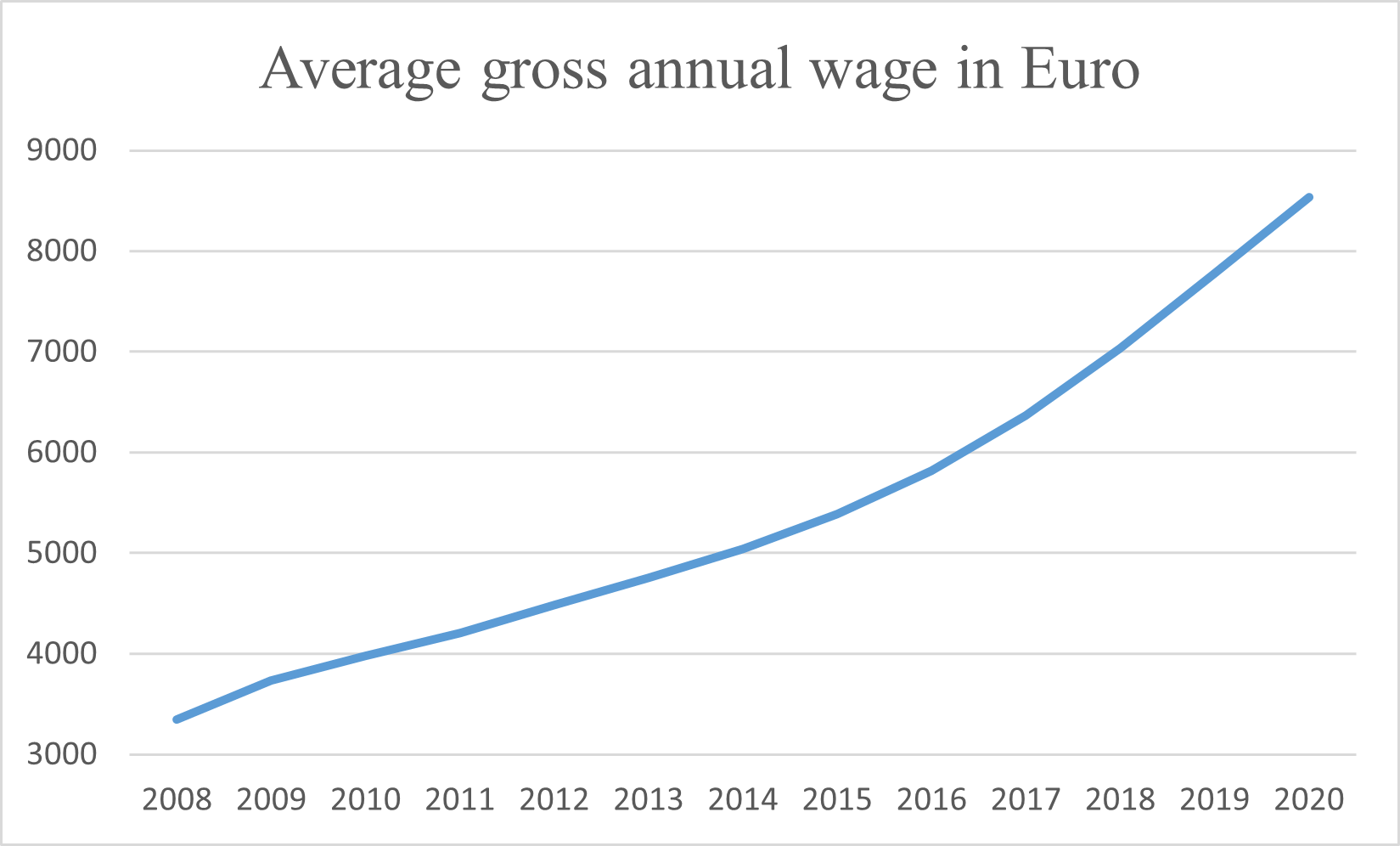 Another trend that defines this period in the history of Bulgaria is the rise in FDI.

The decision to welcome Bulgaria to the EU in 2005 and the official accession on 01.01.2007 put the country in the spotlight as an attractive business destination. The reliability of investing in an EU and NATO country helped boost Bulgaria’s economy with foreign funds.

This factor, accompanied by the new policy of low flat taxes, the availability of a highly skilled workforce, the developed education system and the favourable geographic location with many logistical advantages, gradually transformed Bulgaria into the best nearshoring destination in the EU.

A great example of this is the second largest city in the country – Plovdiv (around 500 000 inhabitants). In the last 15 years, Plovdiv transformed from a provincial town with a stagnating economy into one of the largest industrial centres in South-East Europe. In 2012 Trakia Economic Zone was established – a unification of 6 industrial zones in and around Plovdiv. As of 2022 there are over 200 foreign and Bulgarian companies operating in these industrial zones providing over 71 000 jobs. Huge enterprises like Liebherr, Latecoere, Schneider Electric, Sensata, DB Schenker, ABB, Sanmina, Kaufland, BTL industries, Hannon Systems, etc. not only established facilities in the region but regularly expand their production capacities.

Moreover, the city became the second IT&BPO destination after the capital, with high-paying jobs for 8,000 people and diversifying the economy.

“The lower tax rates and the simple flat taxation system are a huge incentive for potential foreign investors. During negotiations, this is among the first points to be discussed and never fails to capture the attention of investors and consulting agencies together, with a high-quality workforce. The lower rates remove the need for additional tax exemptions and tax breaks or even cashback for investors which competing markets often resort to using. The lack of such attraction incentives removes the possibility for a company to abuse the system and move their operations as soon as the incentives are exhausted – a problem that exists in other countries. Our system is simple and stable, allowing decision-makers to plan the future of their company in Bulgaria with ease and certainty.”  Says Mr. Stefan Stoyanov, Deputy Mayor of Plovdiv for Business Development.

Indeed, the national FDI amount has risen drastically. “For Plovdiv even the years of COVID-19 did not slow down the investment interest – in 2021 and 2022 the region has received the most inquiries, visits and meetings up to date” Adds Mr. Stoyanov. 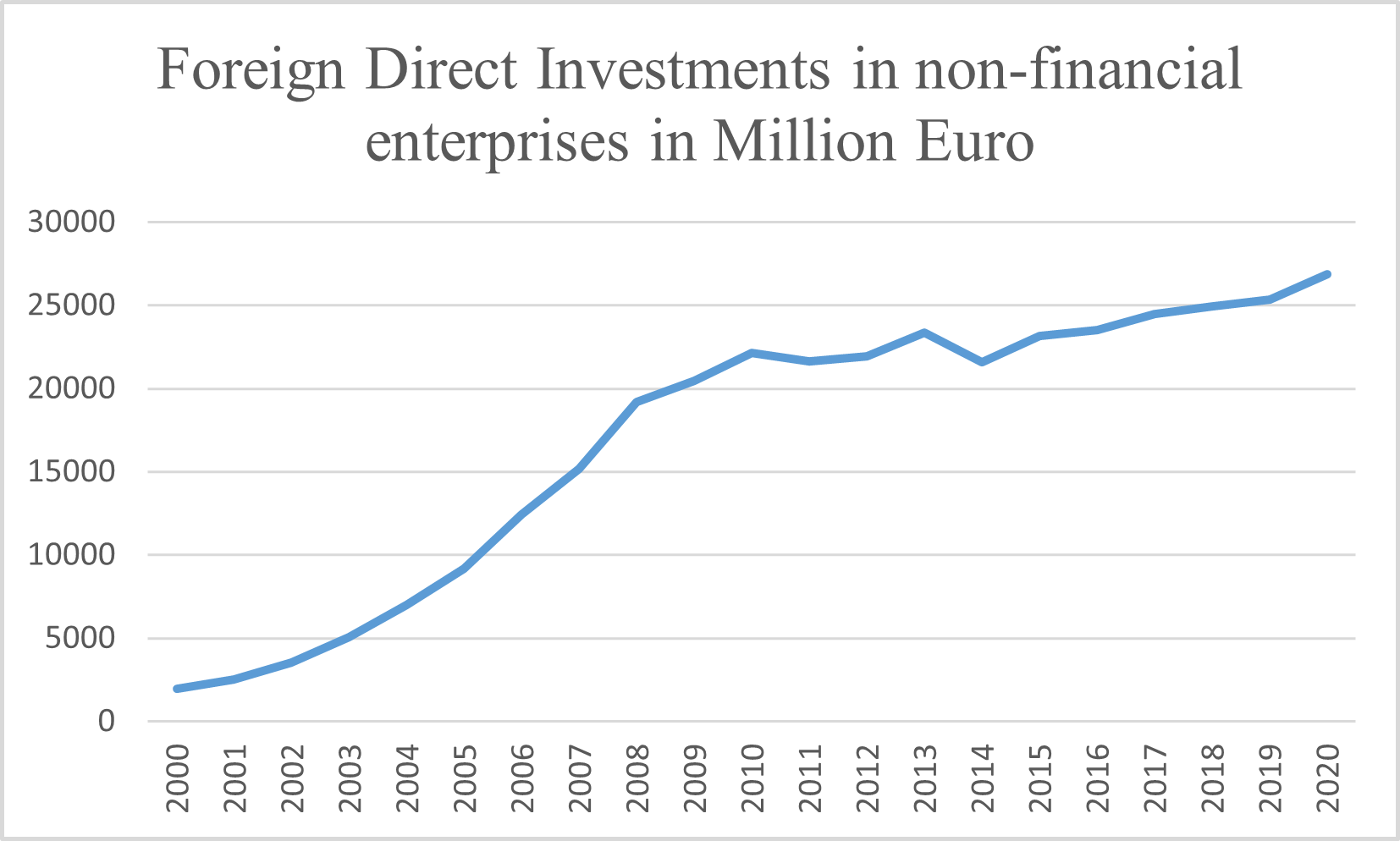 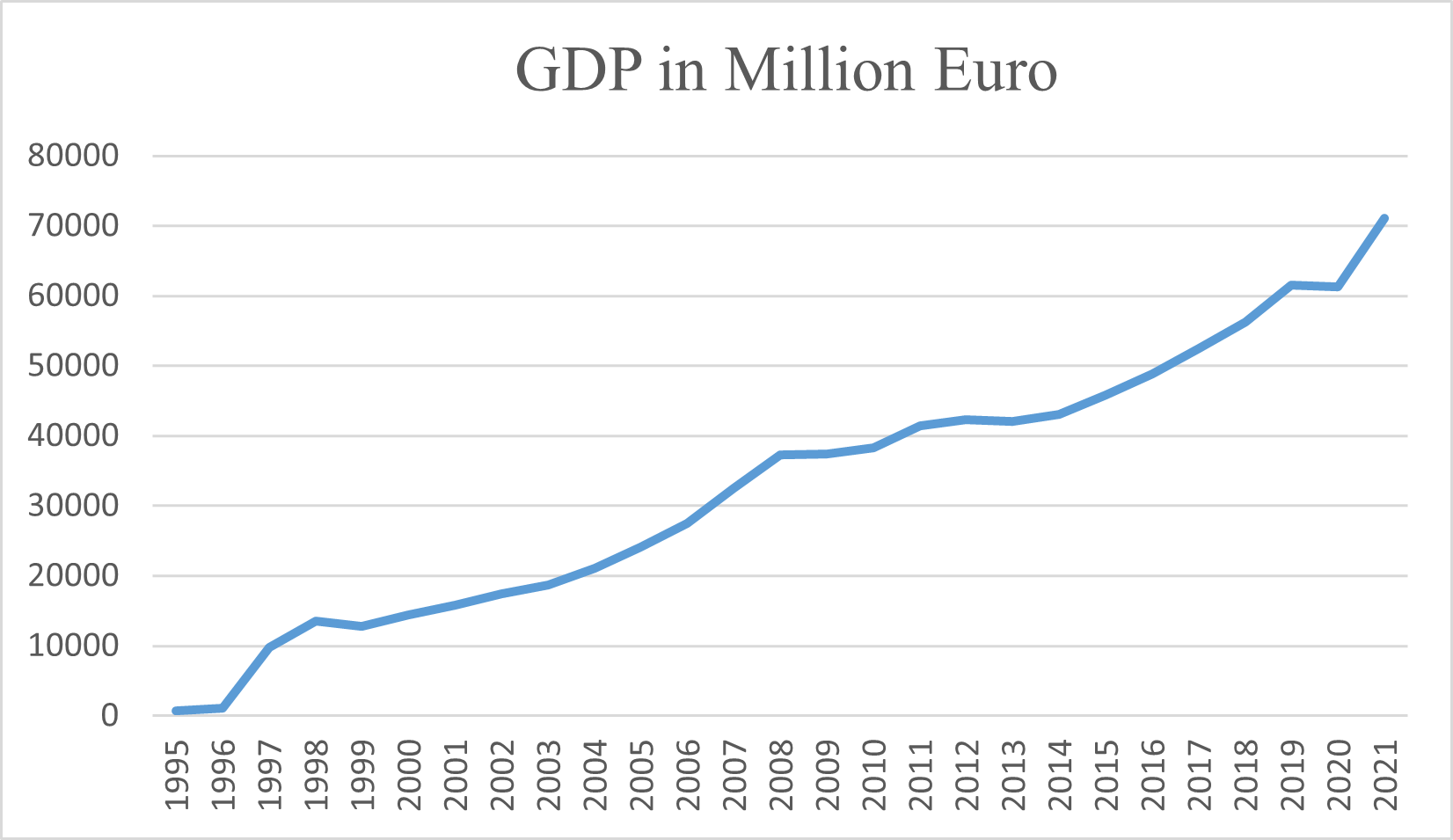 What’s more, in the period 2007-2021 Bulgaria’s Gross Value Added grew by a staggering 126% – the third highest growth rate in Europe for the same period. This is proof of the economic growth and increase in the value of goods and services produced. Even when looking at the problematic years of 2007-2011 Bulgaria places second only to Switzerland with a growth of 31%.

The positive impact of the economic changes in the country has led Bulgaria to enter ERM II, expecting to join the Eurozone in 2024. The country is also awaiting the decision to join Schengen and it has recently started accession talks for the OECD.

While some may argue against this exact system, one thing must be noted – on a global scale, the taxation trend is one of decrease. According to the Corporate “Tax Statistics Third edition” by OECD which compared 112 countries and territories, corporate taxes have decreased in 94 jurisdictions between 2000 and 2021, while staying the same in 13 and increasing in only 4. Indeed, for the same period, the average statutory tax rate fell by 8.3% – from 28.3% in 2000 to 20% in 2021.

While every country faces different challenges which require customized solutions, it is certain that the taxation policy can make a big change in the national economy and that for Bulgaria the formula for escaping the crisis of the transition and growing rapidly proved to be the 10% flat personal and corporate tax.

Mr. Stefan Stoyanov is a Deputy Mayor of the City of Plovdiv for the third term. He is responsible for the Education Department, where he has initiated numerous innovations in the digitalization of learning and the introduction of cloud technologies in the municipal system. Simultaneously he introduced the professional dual-training system and early childhood education reforms. He is also the creator and leader of the Business Development team of Plovdiv which is behind this research. The team serves as a one-stop shop for every potential or existing investor in the region. Its experts assist companies with administrative help, custom research, specialised events, and more.